For episode #5 of the Humans of Kiwi.com series we interviewed UX Designer Tales. Originally from São Paulo, Brazil, he had a lot to tell us about his home country, his travels, and his personal story. For him moving to Brno also meant rediscovering his Czech roots!

Well, I’m thinking of enjoying everything I have as much as I can — my wife, the city… Just life, I would say. I just want to get better at my job and be a better person.

I joined Kiwi.com in December 2017. I came to the Czech Republic because I was looking for documentation about my great-grandfather, who was born in a town called Vítkovice. Today the town is part of Ostrava, but it used to be a city in its own right.

As I was searching for information on my ancestors, my wife told me: “But why don’t you look for a job there?” So I thought: “Well, I could. I don’t think I will find anything, though…” But hey, it worked! So from Brazil I moved to the Czech Republic with my wife, and here I am now.

One thing about your position you dislike or struggle with

One thing that used to be quite difficult for me was the language barrier. I don’t really have to use my mother tongue here. And I couldn’t use it that much anyway, since I don’t have any Portuguese speakers around me. So I used to struggle with that a bit.

Now it’s better, though. We have more and more people here that speak English. I’m also learning Czech, which is, by the way, a very tough language to learn at first.

One thing I love about Brazil — particularly about my city, São Paulo — is that we have so much there. And not just in terms of sightseeing. In São Paulo you can find everything you want from all around the world.

We have a lot of people from many different parts of the world. We even have Czech restaurants there. And what’s more, businesses are open till midnight, some of them even 24/7. It’s a really good place to live.

The thing I like the least is the violence. When I looked for a job here, this is what I was mostly looking for: a place with a good quality of life. 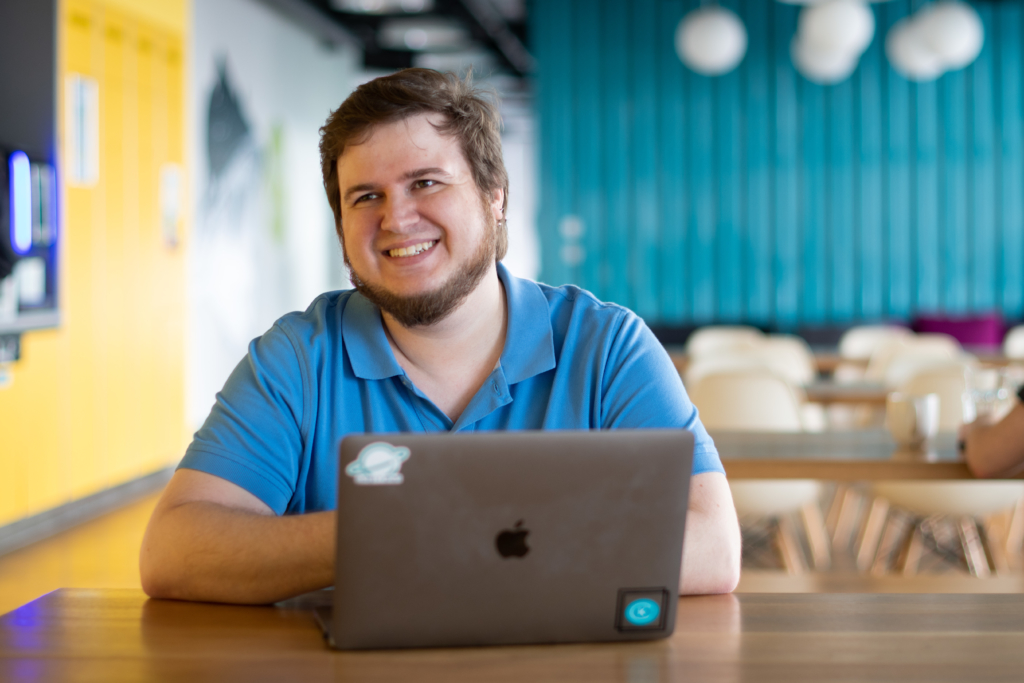 I first travelled to the Czech Republic in 2008 as part of a backpacking trip. The place that blew my mind more than any other was Prague. What’s funny is that at that time I told myself that one day I would want to live there.

Now I cannot say that anymore: Brno for me is much better, also because it’s not as touristy as Prague. Back then, though, it did blow my mind.

I really like all the Art Nouveau architecture there. At the university I studied design — so I also studied Art Nouveau and Art Deco (though I prefer Art Nouveau). That’s one of the reasons I really loved Prague.

[Thinks about it] Well, there’s one place I really want to visit, and it’s Japan. It would be amazing. I would not know where to go in particular. It’s more about the mix between old and new and technology and traditions, which characterises the country. It’s not only about culture, but also about the way they ‘think about things’.

Yes, I remember. It was in Brazil. I went to the State of Goiás in central Brazil. I travelled with some classmates from school. They have a resort with hot water there. It’s called Pousada do Rio Quente, and it’s a hot river resort.

Well, most of the time I have travelled with low-cost airlines. I had a good experience with Tam, which is now Latam. But it has changed a lot. I can’t think of any other especially memorable experiences with other airlines.

Where would you choose to wake up if you could wake up elsewhere tomorrow morning?

I don’t know whether it would work, but it would be in the Swiss Alps. I don’t know Switzerland, but I believe it’s a beautiful place, and I would really like to visit it.

Uh, okay! [Thinks about it] Suitcase. It’s not as large as a bag, and I prefer not to carry a backpack around. I did go on a backpacking trip, but I don’t see myself doing it again. I think it’s more about my style.

Name one travel incident you will never forget

Okay, there is one I can think of. In 1998 I travelled to the US — to Orlando and Miami. When we had to travel back to Brazil, we were told that there were some problems with the plane. As a result, we had to wait six hours at the airport without food or water.

I was 13 years old back then, so I had nothing. I had no money and I wasn’t allowed to leave the group. After six hours, they allowed us on board the plane, but the plane was not ready. We had to wait in there for another two hours with no electricity and no air conditioning. And, yes, I mean in the plane. It was really, really bad.

Well, I’ve been drawing since I was a child, and I’ve always had a connection with that. In particular, I wanted to be a comic book artist, and draw comics.

Then I realised that, yes, you can make a career out of that, but it’s very difficult. So I went for something else instead. I still draw in my free time, though I have more of a cartoon style now. For example, I’m now drawing the people from my team as if they were superheroes. I call them UX-Men. [Laughs]

Where would you go if you could time-travel?

What superpower would you choose to have?

[Briefly thinks about it] This was one thing I’ve always thought about. I would choose to have the power to freeze time. That way, I would have more time to do things. I could do anything I want. I would freeze it for everyone but myself, of course.

Ah yes, I can think of one: Bloody Mary.

It’s not a book but an author. His name is Luís Fernando Veríssimo, and he’s a contemporary Brazilian author. The genre of his work is called magic realism. He’s specialised in writing short stories, only a few pages long. I really like all his books, though, so I can’t think of one in particular.

Wow. [Thinks about it] Oh, difficult! I think… I think the question I liked the most is the one where you asked me why I am here and since when.